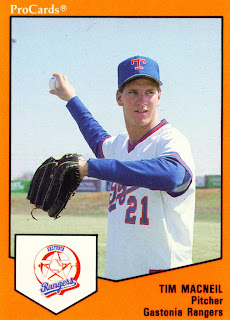 Tim MacNeil, shown here on card number 1024 of the 1989 ProCards set, was the Rangers 13th selection in the 1988 draft. He started his pro career the same year with the Butte Copper Kings in Rookie ball.

In 1988 MacNeil appeared in 24 games, all in relief. He posted a 3.00 ERA and a 1.667 WHIP. Those weren't very good numbers for a right-hander in Rookie ball. That's probably part of the reason that Tim split the 1989 season between the Rookie ball GCL Rangers and the Single A Gastonia Rangers. I'm not sure which team came first in the season but neither stint was particularly pretty. Since today's card shows him with Gastonia we'll take a look at those numbers.

MacNeil tossed 43.2 innings in 22 games with Gastonia. All but one of his appearances was in relief. Unfortunately for Tim his ERA climbed to 5.98 and his WHIP to 1.786. He also continued to battle wildness as he let loose with nine wild pitches and hit three opposing batsmen. Predictably he walked more batters than he struck out (38 walks/32 strikeouts).

Needless to say, 1989 was not a solid season for Tim MacNeil. He was still struggling to get his control and couldn't seem to keep runs from crossing the plate. Neither of these problems is good for a pitcher. That is doubly so for a right-handed pitcher at a low level of play.
Posted by Spiff at 1:25 PM

WOW! My dad actually has this same card.....brings back memories!