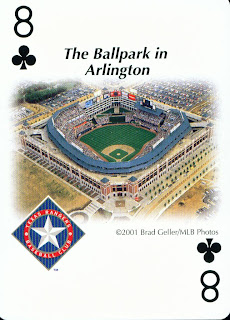 Ok, I have to plead ignorance as far as the first of the next two decisions off of T.R. Sullivan's list. As for the second, well I wasn't really paying much attention in 2001 so I don't remember it.

Number thirteen is is the rejection of Edward Gaylord's attempts to buy the Rangers. He tried in 1987 and 1988. Both times the American League refused to approve the sale for fear that Channel 11 would become a superstation. I have no memory of this and find it hard to understand given Ted Turner, TBS, and the Braves. I do know that with the Rangers still unsold the result was the ownership group headed by George W. Bush buying the team in 1989.

Number fourteen is the firing of Doug Melvin. I'm not sure what Tom Hicks was thinking when he fired Melvin and brought in John Hart. I do know that under Melvin the team had qualified for the playoffs three times and that they didn't at all under Hart. Meanwhile Melvin moved on to Milwaukee and moved them from a sub .500 team to postseason qualifiers. Not hard to see that the switch wasn't a very good move.
Posted by Spiff at 12:20 PM