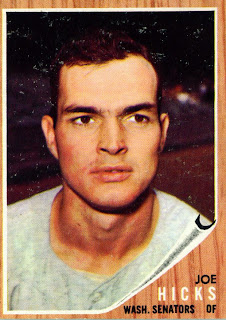 Joe played in 102 games in 1962 and made 191 plate appearances. That was more in both categories than in all three previous seasons where he had Major League experience combined.

In his 191 plate appearances Hicks posted a .224 batting average and a .286 on-base percentage. His on-base percentage was undoubtedly hurt by the fact that he struck out over twice as often as he walked. (15 walks to 34 strikeouts.) He also displayed a lack of power with just four doubles, two triples, and six home runs.

In the field Joe served as a fourth outfielder and played 282.1 innings total in all three outfield positions. He made three errors for a .962 fielding percentage - well below the league average .980.

1962 was Joe Hicks first big shot at the Majors. Too bad he really couldn't capitalize on it. He needed to show something big in order to dislodge one of the regular outfielders. That just didn't happen either in the field or at the plate.
Posted by Spiff at 11:11 AM