Kasey has struck out. 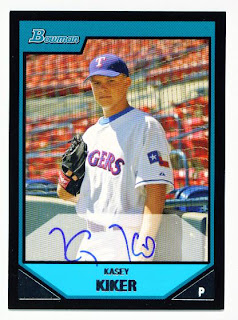 The first round of the 2006 draft has officially not turned out well for the Rangers. Today they released their first round pick. Texas took Kasey Kiker, shown here on an autographed 2007 Bowman card, after the Giants took their original choice, Tim Lincecum.

Fortunately for Texas, Kiker didn't develop the drug habit that Lincecum apparently has. Unfortunately he didn't develop as a pitcher either. In the six seasons since he was drafted Kasey never made it past Double A.

Well, I feel bad for Kasey but that's just the way things shake out sometimes. At least he stayed with it for six years and tried to get it put together. At 24 he still has a lot of good years left and hopefully he finds success in whatever he attempts next.
Posted by Spiff at 1:01 PM

That's too bad. I hope he lands somewhere and gets it turned around.