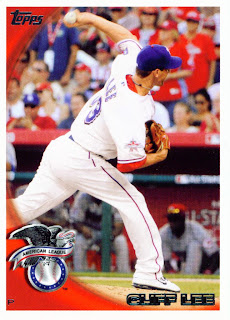 The trade for Cliff Lee in 2010 is number 15 on T.R. Sullivan's list of the fifty decisions that have shaped the Rangers history.

On July 9, 2010 the Rangers obtained the services of Cliff Lee and Mark Lowe from the Mariners. In return Texas sent Justin Smoak, Blake Beavan, Josh Lueke, and Matthew Lawson to Seattle. The trade occurred just in time for Lee to represent Texas in the All-Star game as shown on card US-305 from the 2010 Topps Update Series.

Sullivan enters Lee on the list with the simple words: "The trade that put the Rangers in the World Series for the first time." I think it's not as clear cut as that.

When the trade happened the Rangers were already in first place in the American League West and looked to win the division. Excepting any mental boost Lee did not affect the race at all. His ERA after the trade approached 4.00 as he battled back problems and posted a losing 4-6 record.

The American League Division Series is where the trade appeared to pay off for the Rangers. Lee was masterful as he beat the Devil Rays twice, both in Tampa. On the strength of Lee's two wins the Rangers won their first ever postseason series. That broke the glass ceiling for the franchise as they moved on to the American League Championship Series.

Lee made just one start in the ALCS and won it 8-0 as the Rangers pounded the Yankees in game three in New York to take the series lead. Derek Holland picked up a win as well and Colby Lewis stole Lee's thunder as he won two. Texas downed the Yankees 4-2 to advance to their first ever World Series.

In the 2010 World Series Lee made two starts. He lost both as his ERA soared to near seven. Texas lost the Series 4-1 to the Giants.

So, did Cliff Lee put the Rangers in the World Series? The answer appears to be yes and no. Lee was a non factor down the stretch in the regular season. He was vital in the ALDS, a nice piece in the ALCS, and a real downer in the World Series. The trade was probably worthwhile on the strength of Cliff's ALDS performance alone but the team still had to get through the Evil Empire in the ALCS to get to the World Series. Perhaps T.R. Sullivan should have said that the Cliff Lee trade was the trade that put the Rangers in their first-ever American League Championship Series.
Posted by Spiff at 12:04 PM