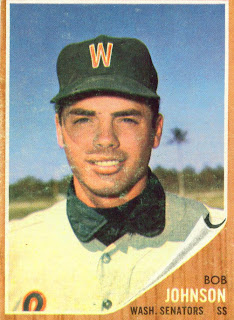 Bob Johnson's 1962 Topps card, number 519, identifies him as a shortstop with the Washington Senators. While Bob was with the Senators in 1962 he didn't play just short.

Johnson was actually the closest thing the Senators had to a starting third baseman in 1962. He played 612.2 innings there in 72 games. He also played 416.2 innings at shortstop in 50 games. Those were his two main defensive positions but he also played seven innings in one game in left field. All told Bob committed 22 errors in total on the season - 13 of those were at third. There was a reason for that, Topps was right. Johnson wasn't a third baseman. 1962 would mark the highest number of games and innings he would play at third in his career. It was one of only three times in an eleven year career that he broke the 100 inning mark at the position.

Johnson made 504 trips to the plate in 1962 - over twice the number of the previous season. He managed to compile a .288 batting average (second only to Chuck Hinton on the team) and a .334 on-base percentage. He also knocked a career-high 12 home runs and 20 doubles. Two triples also jumped into the mix. Unfortunately Bob also struck out a career-high 50 times while walking just 32 times - also a career high.

By the end of 1962 the Senators had a problem. Bob Johnson was obviously struggling with the transition from shortstop to third base. Leaving him at short was not an option with Ken Hamlin and Ed Brinkman already doing battle for the position. That made Bob expendable. On December 5, 1962 Washington sent him and Pete Burnside to Baltimore in exchange for Marv Breeding, Art Quirk, and Barry Shetrone.
Posted by Spiff at 5:54 PM