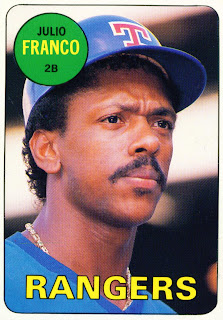 Number 12 on T.R. Sullivan's list of the Fifty Best Seasons in Rangers history goes to Julio Franco, shown here on card number BC39 of the 1990 Baseball Cards Magazine set.

Julio's 1991 season really stands out for one number, his batting average. Franco tormented opposing pitching that year as he racked up a .341 average. That easily won Julio the first batting title in Rangers history. How easily? Well, he was nine points ahead of second-place Wade Boggs in the race.

While the batting average and title stole the show in 1991 they weren't the only impressive numbers for Julio that year. He also complied a .408 on-base percentage and stole a career high 36 bases. His 108 runs scored were also a career high.

All told Franco had a career year with the bat in 1991 and the awards committees recognized it. In addition to the American League batting title he also went the the All-Star game and received a Silver Slugger award as well as receiving some MVP consideration. Perhaps just as important for the fans, he brought a batting title to a team that had never had a player win one.
Posted by Spiff at 4:07 PM