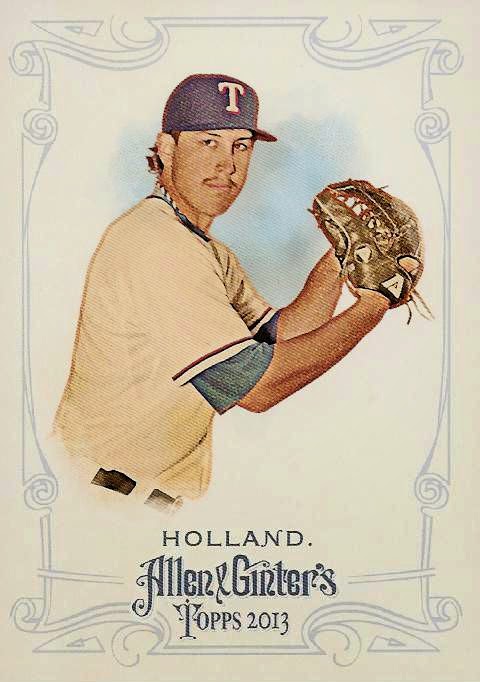 Been a little over a week since my last post and I apologize for the delay. Things got busy at work and home and a computer issue ate up any remaining time I had. Lots happened with the Rangers during that time as they seem to be determined to finish the 2014 season on a high note.

After the sweep against the Braves the club traveled to Oakland to take on the A's. The A's had the first AL wildcard at the time and were hanging on by a thread in the division race. The Rangers didn't help either cause as they swept the series to run their win streak to seven. That's the highest win streak of the season. The Angles clinched and the A's found themselves tied for the second wildcard and looking at missing the post-season. A 1-2 series against the Angels finished out the road trip and the season's travels. Back in Arlington the Rangers have handed the Astros a loss to start the final home stand.

Yesterday's win came with Derek Holland, shown here on card 230 of the 2013 Allen and Ginter set, on the hill. It's win number 63 and assures the club that, no matter how dark this season is, it will not be a 100 loss season. Derek went 7+ innings and allowed just two earned runs. That runs Dutch's record to 2-0 and his season ERA to 1.31. Really makes one regret his missed season and hope he can keep it going next year.

While the club was busy playing spoiler they announced that Alex Rios will likely miss the rest of the season with his bruised thumb. Looks likely to me that Rios has played his last game as a Range. I don't look for the team to pick up his option in 2015. Colby Lewis is the other big name the Rangers are looking to lose in 2015 through free agency. He has already spoken to Jon Daniels about a contract for next year. JD says the talks will be serious and the team is interested in retaining Lewis. Lewis is interested in staying so it looks good that he will be back in 2015.