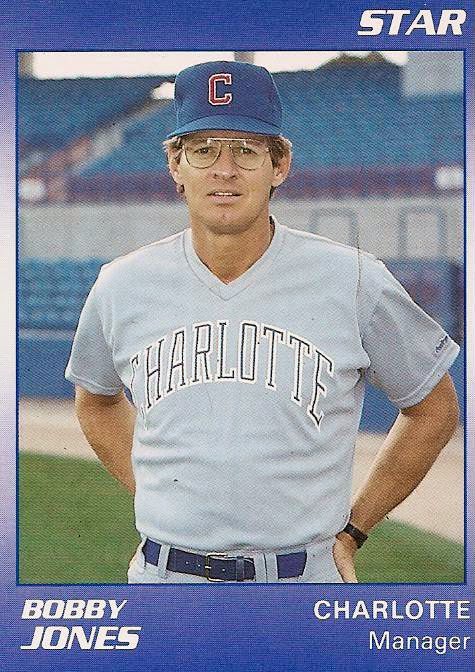 Time to finish up the 1990 Star Charlotte Rangers team set. Card number 29 in the set is manager Bobby Jones. A former Major League player with the Rangers and Angels, Jones was in his third year as the skipper of the Charlotte Rangers in 1990.

Over the course of the season Jones guided the team to an 85-53 record. It was his third winning season in a row and the best to that point. That's something when working with the variable talent and mid-season roster changes inherent at A+ ball. The team would go on to lose in the second round of the playoffs.

The Rangers liked what they saw from Jones at the helm for Charlotte. In 1991 he was named as manager of the Double A Tulsa Drillers. He would continue on as a long-time minor league manager in the Rangers system. 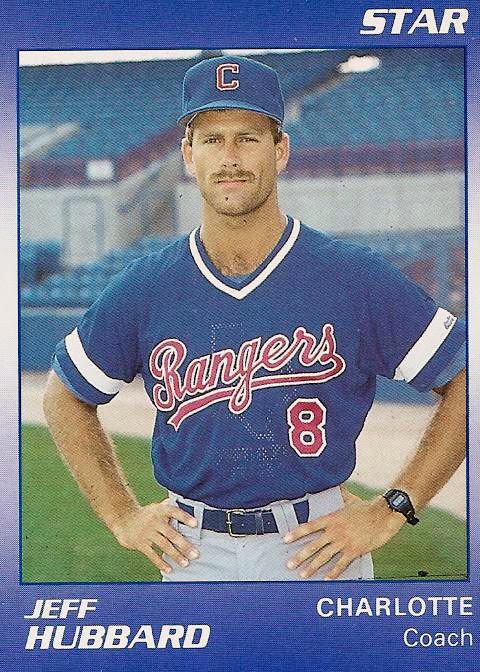 A former minor leaguer in the Rangers system, Hubbard was a jack of all trades as a player. In the course of his fives seasons he played in the Twins, Orioles, and Rangers systems as well as a season in independent ball. Starting out as a position player, Jeff played every position except catcher but never moved above Double A. The position player gig not working out, Jeff turned to pitching. He tried it for a full season in 1988 as a reliever with the Port Charlotte Rangers under their new manager, Bobby Jones. In spite of Hubbard's best efforts, the transition to pitcher didn't take. He had reached the end of playing days.

Apparently Hubbard had caught someone's eye though. He moved straight from player to coach and did well in his initial season in 1989. That led to a renewal of his contract for 1990. Obviously he continued his success as the team made the post-season. I was unable to find out how the next season unfolded for Hubbard.

More important than the winning at A+ ball was the player development. Ten of the regulars on the Port Charlotte roster in 1990 went on to appear in the Majors. Not all were impact players or even able to stick at that level but Jones and Hubbard were able to get those guys a solid foundation, continue their development, and give them a shot at the Big Time.
Posted by Spiff at 12:05 PM