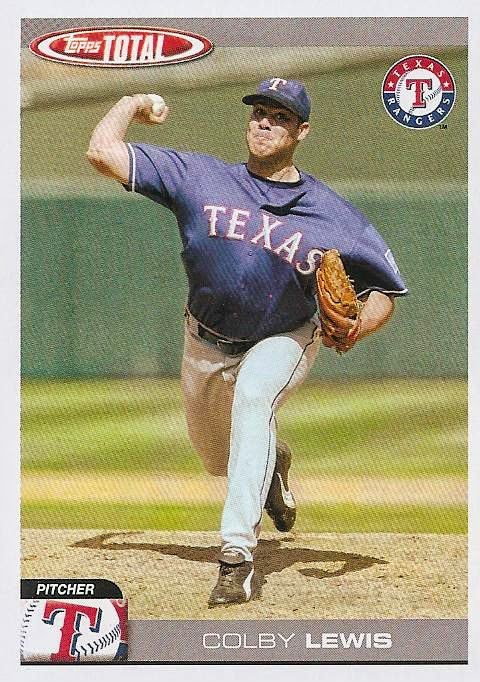 The 2014 season has contained a lot of sighs for the Rangers and their fans. It hasn't had a lot of highs. One of the few has been Colby Lewis, shown here on card 83 of the 2004 Topps Total set. Lewis was expected to have to fight for the fifth starter's spot this year while trying to come back from hip re-surfacing surgery. No other player has ever made it back to the Majors after such a surgery. Needless to say, nobody expected much from Lewis.

Those expectations have been dashed. Colby's been the anchor of the rotation this season and seems to be getting better as time passes. All the other starters are gone due to injury and Lewis is the last man standing. He's standing pretty well too.

Yesterday Colby got the ball in the final game against the Atlanta Braves. The Braves are (were?) in the National League wildcard hunt when they rolled into Arlington on Friday. Two losses later the Rangers turned to Lewis to try and finish out the sweep. Colby went seven innings and gave up just one run. When the patchwork Rangers lineup broke the game open with six runs in the fifth the writing appeared to be on the wall for Atlanta. Two more runs in the sixth brought the Texas run total to its final of 10. The Braves got two off the bullpen after Lewis left the game and he got his 10th win of the season, 10-3.

The last time the Rangers got a sweep was in late April with a lineup that's long since hit the Disabled List. Great to see the team still fighting and managing to pull off a sweep against a contender. The young guys in the lineup got to try out their bats as all but Adrian Beltre and Daniel Robertson (a replacement in the 5th) got hits. I'm not worried about Beltre or Robertson since I know both can hit.

This being 2014, the day could not be one of just a high, there had to be a sigh somewhere in the mix. It came courtesy of Michael Choice. Choice hit a double in the fifth inning. As he came into second base he pulled up and grabbed his left leg. A trainer and interim manager Tim Bogar carried him off the field. Initial word is a hamstring strain with an MRI today. I haven't heard the results of the MRI but I'm guessing Choice is out for the rest of the season. Michael has been struggling this year and he needs all the experience he can get to set the stage for next season. It's rather disappointing to see him go down this close to the finish line.
Posted by Spiff at 4:50 PM