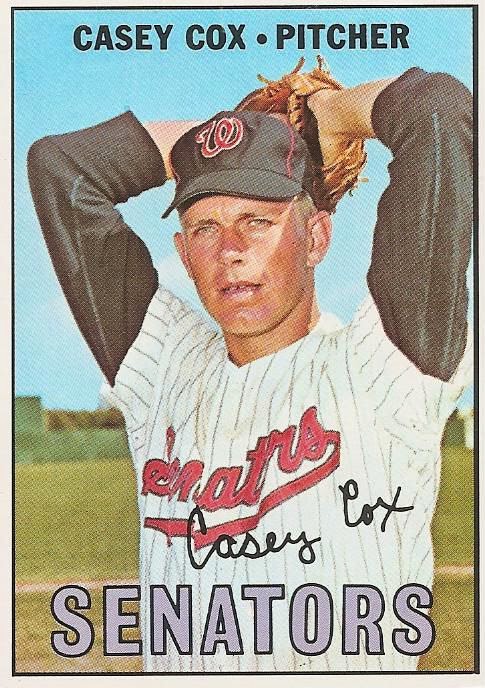 Casey Cox, shown here on card 414 of the 1967 Topps set, was starting his second season with Washington in 1967. As an aside on the card, I don't particularly care for the pinstripe uniforms. To some it is the classic look. To me it is the mimic the Yankees look. Anyway, on with Casey Cox. He had a pretty good season in 1966 and led the Senators bullpen in appearances. He aimed to nail down his spot on the pitching staff in 1967.

Cox spent part of the 1967 season at Triple A Hawaii. I'm not sure of the circumstances but he appeared in 14 games for the Islanders and posted a 2.10 ERA and an 1.100 WHIP over 30 innings pitched. That seems longer than a re-hab stint but he could have been sent down for a sore arm or something similar. Could also be that he struggled a bit after the hard use the previous season and needed some more time in the minors.

Casey didn't spend all his time in the minors though. He appeared in 54 games for the Senators in 1967 and pitched 73 innings, all in relief. He managed to put together a 2.96 ERA and a 1.205 WHIP. He allowed just two home runs so obviously his sinkerball was working most of the time. He struck out 32 opposing batters while unintentionally walking 21. All of his numbers were about the middle of the pack for Washington relievers.

Pitching was better in Washington than it had been early in the team's existence. That meant the competition was tougher when it came to nailing down a spot. Cox hadn't done poorly and had improved from 1966 but he needed to keep that improvement going if he wanted to be a permanent fixture on the Senators pitching staff in 1968 and beyond.
Posted by Spiff at 11:10 AM

The addition of Darold Knowles from the Phillies (who became the Sens' closer in his 2nd big-league season), Bob Priddy from the Giants, and rookie Dave Baldwin to Washington's bullpen in 1967 seems to have crowded-out Casey Cox, at least for that month.

I am also thinking those additions are what put Cox out of a full-time job in '67. That's the increased competition I mentioned. It's interesting to look back and see how the club's pitching improved as time went on.