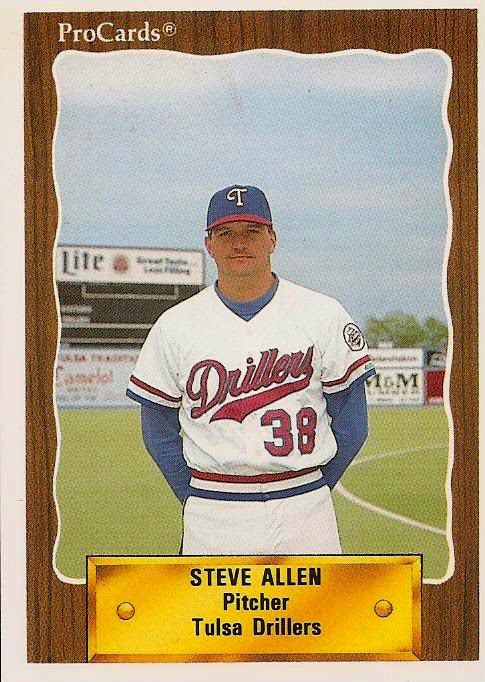 Starting off on the 1990 ProCards Tulsa Drillers team set today. This set is a bit unusual because it uses the regular ProCards numbering but seems to be a special set of just the Drillers. The cards use slightly different photos from the regular set cards. Also, on the back of each card in this team set is an advertisement for Tulsa's Baseball Card Store. Two locations are given - 51st and Peoria and 68th and Memorial. Does anyone know if either of these are still open?

Kicking off the team set is pitcher Steve Allen on card #1148. Allen had been with the Gastonia Rangers at Single A in 1989. He's actually been featured here on a second card for his 1989 season. He got the promotion to Double A Tulsa to start the 1990 season.

Steve was a reliever and mostly a back of the bullpen guy. He made 54 appearances for Tulsa in 1990 and finished 23 games. Over the 89.1 innings he pitched he put together a 3.83 ERA and a 1.556 WHIP. His strikeout to walk ratio was a very respectable 2.00 as he struck out 84 opposing batters while walking 42.

Allen's ERA was up from the previous season in Single A but that was to be expected with the increased ability of the batters. Perhaps it was a bit too much of a jump for the Rangers. They traded Steve and fellow minor leaguer David Lynch to the Dodgers for Jim Poole on December 30, 1990.

After leaving the Rangers organization, Allen pitched for four more seasons with in the minors with LA and Colorado. He topped out at Triple A and hung up the spikes following the 1994 season.
Posted by Spiff at 10:58 AM