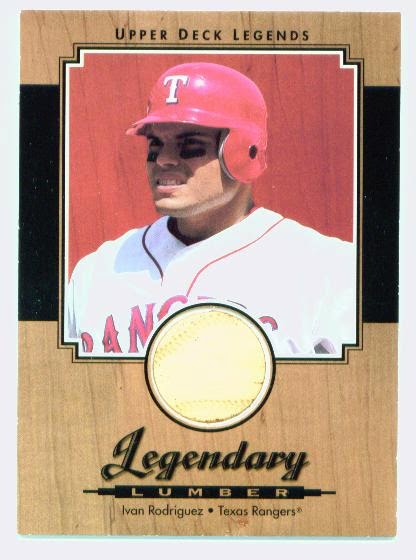 Not much going on with the Rangers right now. The losing continues and their magic number to avoid 100 losses remains at 10. They've now set a franchise record for the number of players used in a season and may be looking at a Major League record before long. Not exactly the type of happenings to inspire blog posts.

Decided to post a random Rangers game-used card today. Well, not totally random. I did decide it would be a random card of Ivan Rodriguez. This 2001 Upper Deck Legends Legendary Lumber card won the randomness.

This card is fitting in several ways. First, Pudge really is a legend. He's still revered in Texas and just the site of him or mention of his name will raise a cheer in The Ballpark. Two, Ivan's wearing the red uniform here. I know, the Rangers won in red. The Senators also did a lot of losing in red before the team moved to Texas. Right now the team is playing more like the red-wearing Senators than the teams of the late 90's.

Perhaps the best reason to post this card is to remind folks that I still have several Ivan Rodriguez game-used cards left on my tradelist. This one isn't one of them and none of them area of him in a Rangers uniform but if you are a Pudge, Tigers, or Marlins collector you should check it out. Let me know if you see anything you like. I'm always looking to pick up Rangers game-used cards so I'm sure we could work a deal.
Posted by Spiff at 11:53 AM