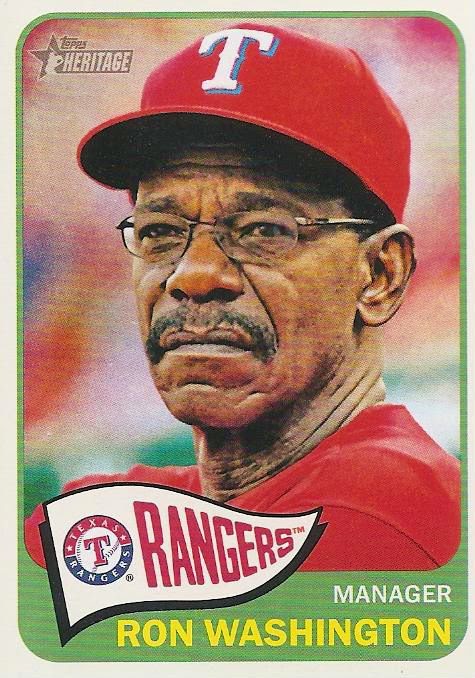 By now it's likely that everyone knows about Ron Washington, shown here on card 274 of the 2014 Topps Heritage set. Yesterday afternoon, without warning, the Rangers announced Wash's resignation as manger. The departure was attributed to an off field personal issued. The only details the club would give are that this is not a repeat of the 2009 cocaine issues. General Manager Jon Daniels said he was disappointed in Ron's decision but understood. Most everybody else on the team expressed shock and disbelief.

Those connected with the team weren't the only ones in shock. I used Spiff Jr's response to the news as the title of this post. At ten years of age he doesn't remember any Rangers manager other than Ron Washington. I know how he feels. When the club fired Bobby Valentine in 1992 I felt like I was lost. Bobby was the only manager I had ever seen in the dugout and his firing tilted the world off axis. I'm sure it's the same with Spiff Jr and Washington. The thought of Ron not in the dugout has not been entertained in that young fan's mind and now it's happened. I have to admit, I'm pretty stunned by the news as well.

The eight seasons of Washington's tenure have been a bright spot in Rangers history. He was the longest serving Rangers manager, managed the most games for Texas, and has the highest winning percentage of any Rangers manager staying for more than a season or two. He also took the club to three post-season appearances and two World Series. He will be missed and leaves a big hole.

Even as the club named bench coach Tim Bogar the interim manager, the chuckle-heads were out. Some were glad to see Washington gone. He wasn't a good manager anyway they claim. Seems Jon Daniels (who many of those folks also despise) was able to assemble a team that could win consistently in spite of Ron. The tinfoil hat variety of ding-dongs claim Jon Daniels forced Washington out because Ron was a Ryan guy. That makes about as much sense as the guys who are happy to see Wash go. Jon Daniels hired Washington a year and a half before Ryan made the scene. If JD wanted to cut him he could have several times before this point and simply needed to wait until the end of the season to not give him a new contract. Both view points are out of touch with reality.

The reality is, we have just seen one of the best managers in Rangers history take his leave. I respect Ron's right to have his personal matters private and am hoping he can get whatever it is taken care of. Thanks for the memories Wash, all the best as you move on from here.
Posted by Spiff at 12:25 PM

Surprised and shocked. I hope all is well with Wash.