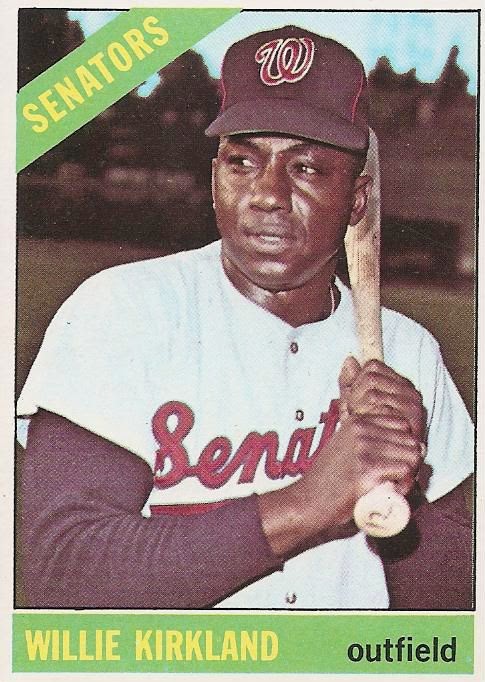 On the back of card 434 in the 1966 Topps set Willie Kirkland is referred to as "One of the game's top power hitters..." That description was accurate at one point in Willie's career but he suffered a power outage in 1964. He saw a resurgence of sorts in 1965 and the Senators were hoping to see more of the same in 1966.

Serving primarily as a fourth outfielder in 1966 Kirkland saw service in left and right field. He played 174.1 innings in left over 50 games and 126 innings in right over 19 games. He committed just one error in right field and none in left. That averaged out overall to a fielding percentage on par with the rest of the league.

Willie made 182 plate appearances with the Senators in 1966 and that is where the wheels really fell off for him. He managed just a .190 batting average and .261 on-base percentage. The fact that he stuck out 50 times while working just 16 walks spoke of his past as a power hitter. The two doubles, one triple, and six home runs made it clear that he was a power hitter in the past and not present.

Apparently the Senators decided Kirkland was not going to be able to regain his early career form. They released him on October 18, 1966. That was the end of the line for Willie Kirkland's Major League career.

Even though they released him, Washington must have offered Kirkland one last chance. He spent the 1967 season playing with the Senators Triple A affiliate, the Hawaii Islanders. He found his form there and slugged 34 homers over the course of the season. That wasn't good enough to get back to Washington but it was good enough to get a contract with the Hashin Tigers of the Japanese Pacific Coast League. Willie spent six season with the Tigers in the role of slugger. He never hit .270 and he never had a slugging percentage under .400. He retired as a player after the 1973 season with 126 home runs to his credit in the JPCL. That was just 22 less than the 148 long balls he tallied over nine season in the Majors. Apparently the jump to Japan worked out well for Willie.
Posted by Spiff at 8:33 PM