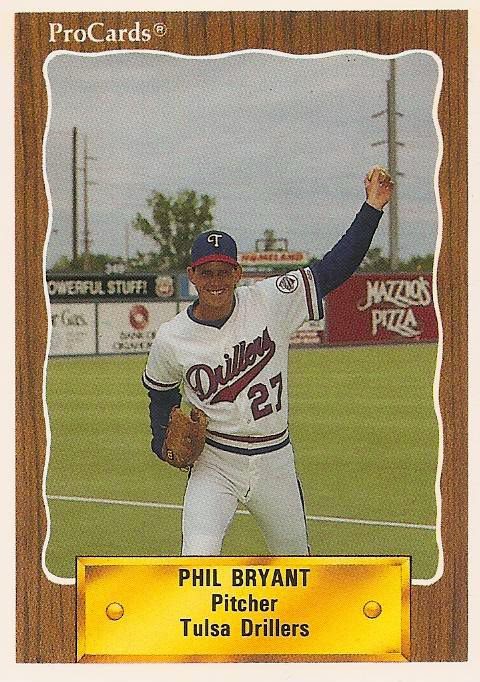 Phil Bryant seems to be a good mood as he poses on card 1149 of the 1990 ProCards Tulsa Drillers team set. Maybe he was just glad to finally be at Double A.

The Rangers signed Bryant as a free agent in February of 1987 and he started his career with the Gastonia Rangers the same season. He got knocked around there and ended the season with a 5.31 ERA and a 1.496 WHIP after 31 appearances and 142.1 innings. Phil was primarily a starter so a slightly higher ERA was acceptable but north of five in Single A ball is not a good sign.

Regardless, the Rangers promoted him to Single A+ Charlotte for the 1988 season. He made significant progress there as he switched to being exclusively a reliever. Over 35 appearances he posted a 2.41 ERA and an 1.211 WHIP in 71 innings of work. That was much better than the previous season and good enough to earn him a promotion to Double A Tulsa for the 1989 season.

1990 was do or die for Bryant. Now 25 years old, he needed to have a breakthrough season and really impress.

Phil made seven starts in 19 appearances for Tulsa in 1990. He pitched 69.1 innings and turned in a 3.38 ERA and an 1.327 WHIP. Those numbers weren't calculated to amaze but they were progress and the Rangers decided to see what Bryant could do at Triple A. He appeared in 14 games for the 89ers and pitched 58 innings. Phil got hammered to the tune of a 5.90 ERA and an 1.759 WHIP.

That was enough for the Rangers. They released Phil following the 1990 season and his career appeared to be over. It wasn't though. In 1995, at age 30, Phil Bryant made a comeback attempt with the Lubbock Crickets, an independent minor league team. His 5.01 ERA and 1.693 WHIP ensured that his comeback did not last past the 32.1 innings he pitched that season.
Posted by Spiff at 11:46 AM