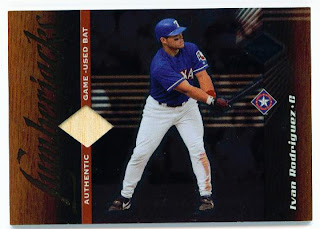 Number seven on T.R.'s list of best seasons is Ivan Rodriguez's 1999 performance. Pudge is shown here on card number 174 of the 2001 Leaf Limited Lumberjacks set. The card features a piece of Ivan's bat and is numbered 399/500.

By 1999 Ivan Rodriguez was established as the Rangers starting catcher and as a defensive genius behind the plate. At age 27 he had been in the majors for eight seasons and had been an All-Star seven times. He had also won eight Gold Gloves and five Silver Slugger awards. It seemed that it would be hard to top such performances. Top them he did though.

In the field Rodriguez continued his remarkable defense. He committed just seven errors all season for a .993 fielding percentage, two points above the league average. He also allowed just one passed ball all season. Stealing on Pudge was not a safe undertaking. He threw out 41 would-be base thieves while only 34 runners survived the attempt. That gave him a league best 55% caught stealing rate.

Rodriguez's defense had always been good. In 1999 he finally put together an outstanding offensive year as well. People noticed. Once again he won a Gold Glove and Silver Slugger awards and was named to the All-Star game. He was also named the MVP of the American League.

I loved watching him pick guys off first.