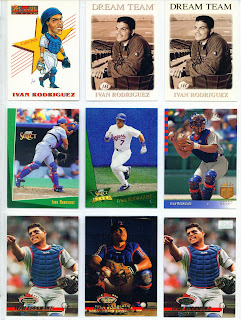 Overall a nice group of cards. I have to say that I like the Select card the best. Ivan gunning down a would be base stealer.

So, here we are at the end of the regular season. Most of the Playoff spots are locked down. Once again the Rangers scored over 800 runs on the season while missing the post-season. This marks the 13th season they have scored that many runs. Shortstop Michael Young ends the year on top of the league in fielding percentage and double plays.

What next year brings will be interesting. If pitching can be nailed down, Texas will contend. They open the 2009 season at home. Who all will be wearing the home uniform though remains to be seen.
Posted by Spiff at 10:43 AM