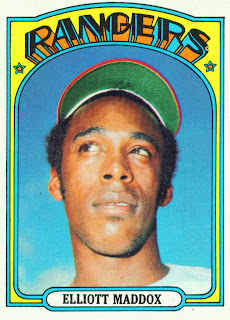 Running behind so tonight's post will be quick. Guess working and then mowing the yard will put one behind on posting the day's card.

On to the card. Today's card should please the gals at Dinged Corners as it is a 1972 Topps, number 277 in the set. Elliot Maddox arrived in the same trade that sent Denny McLain to the Senators. Unlike McLain he would make the move to Texas with the team and play in 98 games in 1972.

I like this card for a couple of reasons. First has to be Maddox's expression. Looking kind of sly there. Second is the trivia question on the back. It asks who threw three shutouts in four days against the New York Americans. The answer is Walter Johnson. Gotta love the Big Train. Anyone who can shutout the Yanks (or their forerunners) like that is ok in my book.
Posted by Spiff at 9:31 PM