Rangers open in NY with win. 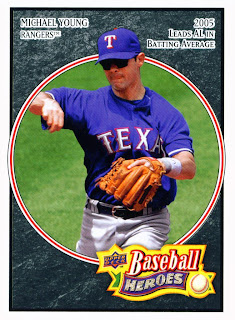 The Rangers picked up a game in the AL West last night as they beat the Yankees in New York. The Evil Empire attempted a ninth inning comeback and Texas barely escaped with a 10-9 win.

As you might figure with such a score, the emphasis was mainly on the offense. The big knockers for Texas were Elvis Andrus, Josh Hamilton, and Michael Young, seen here on card number 167 of the 2008 Upper Deck Baseball Heroes Charcoal set.

Young was 2-for-5 at the plate with two runs scored, three RBI, and a home run. Not too bad for a washed up old man. Hamilton kept up with a 4-for-6 night including two RBI. Andrus post a 3-for-5 tally with a double, a run scored, and three RBI. As a side note, in his return to the majors Chris Davis went 2-for-4 and avoided the strikeout.

On the defensive side of things Andrus also pulled off an unassisted double play to end the ninth inning. Marlon Byrd made a by now routine diving catch in the outfield to rod Melky Cabrera of a hit. Neftali Feliz made a two inning scoreless appearance, striking out two.

A good thing to get the win in the opening game of a crucial series like this one. It would be nice to see the Rangers pick up at least one more win in the next two games. Taking a series from the Yankees in the Belly of the Beast would be a great morale booster.
Posted by Spiff at 11:46 AM