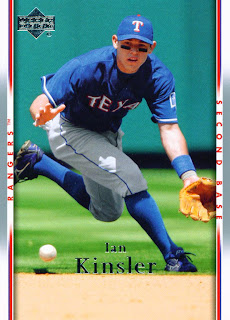 The Rangers pulled off a 7-2 win in New York last night to take the three game series from the Yankees. In my view winning that series was huge. I'll put up a poll to see if anyone else agrees with me.

Jason Grilli was the mainstay pitcher last night after starter Dustin Nippert struggled early. Grilli went 2.1 perfect innings in relief to get the team over the hump and collect the win.

Ian Kinsler, seen here on card number 221 of the 2007 Upper Deck set, led the offensive charge for Texas. Ian was 2-for-4 at the plate with both hits being home runs. He collected four RBI as a result. Chris Davis hammered a three run shot for his first home run since rejoining the team. That was all of the RBI for the evening for Texas but the other guys were obviously getting on base. Nice to see the offense firing.

On to Minnesota tonight for the farewell series at the Metrodome. Hopefully the roll continues.
Posted by Spiff at 7:07 PM