Bombed in The Bronx. 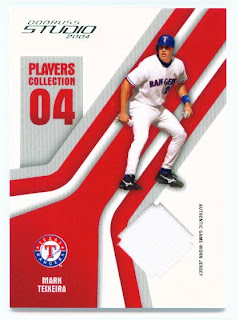 Mark $ Teixeira and his Yankee teammates unloaded on Texas last night with a 9-2 score. Ugly game. Dollar Man is seen here on card number PC-59 of the 2004 Studio Players Collection set. The card is numbered 53/150 and features a piece of Mark's jersey that smells like money.

The only Ranger whose bat was working last night was David Murphy. Murph went 2-for-4 with a double and a home run. He had a run scored and the only two RBI for Texas.

Following last night's debacle Jason Jennings was designated for assignment and Pedro Strop called up from Triple A to replace him. Wonder if that means my autograph request to Jennings will go unanswered?
Posted by Spiff at 1:15 PM