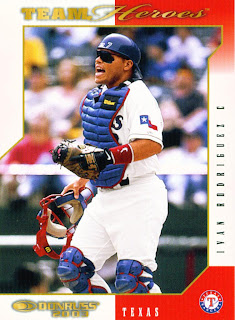 In a surprise move yesterday the Rangers traded two minor league players to the Astros for Ivan Rodriguez. After six and a half seasons Pudge, shown here on card number 509 of the 2003 Donruss Team Heroes set, is home.

Needless to say, most fans are ecstatic and the players are pretty excited as well. All in all this seems to be a popular move.

I happen to think this is a good move for Texas at this point in the season. Pudge is getting old but he can still play and appears to be fine with being Taylor Teagarden's backup. That will give the Rangers some spark coming off the bench and Taylor a great opportunity to learn from one of the greatest backstops ever. It also gives a veteran presence in the clubhouse with post-season experience. If Pudge was ever involved with PEDs he off of them now, what with the testing and his stats dropping like they should at his age so I think that is of little concern.

Houston had Pudge signed to a one year deal so he will be a free agent after this season. Of course the Rangers will hopefully have Jarrod Saltalamacchia back by then. Also, Pudge didn't get signed by Houston until Spring Training was almost over. Maybe that sent him a message. Perhaps it is time to call it a career. This could be his opportunity to retire a Ranger.

Yesterday's post generated several comments asking where I had come up with the possibility that Jarrod Saltalamacchia might have Thoracic Outlet Syndrome. The possibility is mentioned in this article in the third paragraph. I'm glad I was able to find it, at least I know I'm not crazy yet.
Posted by Spiff at 10:55 AM

I'm just glad I got to see Pudge at least once as an Astro! Now I'll get a chance to see him as a Ranger again next month.

Pudge was liked here in Houston and I've always been a fan. But the Astros are going nowhere this year. Their annual back-from-the-dead routine is not going to happen this year. Here's hoping that Ivan can help the Rangers into the playoffs.

It was almost a perfect return, once again the Rangers couldn't finish off the Twins.

It is good to see pudge as a Ranger again. I agree that it is a good time for him to call it a career and quit - but I doubt that he will.