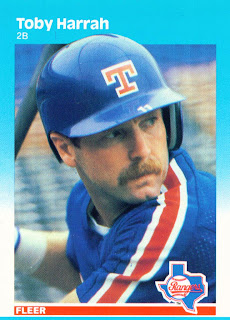 The Rangers inducted two past players into the Rangers Hall of Fame tonight before the game against the Mariners. Toby Harrah and Ruben Sierra both got the nod from the fans to join ten others in the Hall.

Toby Harrah, seen here on card number 125 of the 1987 Fleer set, put in two stints with Texas. Toby actually started his big league career with the Washington Senators in 1969. He spent 1970 in the minors and then was up for good in 1971. Harrah made the move to Texas with the team and stayed with them until December of 1978 when he was traded to Cleveland. The fact that Toby was exchanged for another fan favorite, Buddy Bell, didn't lessen the sting of losing one of the most popular players on the club. In February of 1985 the Rangers sent Billy Sample to The Evil Empire to bring Toby home. He played two more seasons for his original club and then retired at the end of the 1986 season. In his eleven years with Texas Toby made the All-Star team three times. 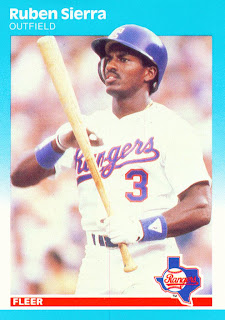 The second player inducted was Ruben Sierra, seen here on card number 138 of the 1987 Fleer set. Ruben's first year in the Majors was Harrah's last. Ruben was a slugging switch-hitter who helped redefine the Rangers. As one of the early big bats, he was the harbinger of the big bopper teams to come. Sierra would do three tours with the team. The first would last from 1986 to 1992 when he was traded to Oakland. Ruben's surly attitude helped ensure that there was little feeling of loss from the fans as he departed. He was back again in 2000 and 2001 before being released at the end of the 2001 season. In 2003 the Rangers signed him again and he played until June when he was traded to The Evil Empire. That was the last of Sierra's playing time with Texas.

Congratulations to both of these guys on the honor that they have received. I know Toby appreciates it and it means a lot to him. Hopefully Ruben feels the same way.
Posted by Spiff at 7:00 PM

I wonder what took them so long to induct Mr. Harrah.

I have no idea. I would have thought that he belonged with the initial class.

Toby Harrah was my favorite player as a kid.
Glad that the Rangers got around to including him.Better late than never,I suppose!