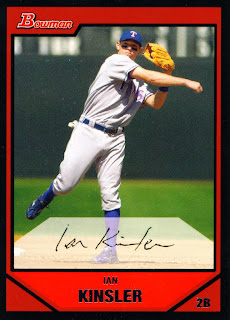 The Rangers were busy this past weekend. They lost to Seattle on Saturday and then won last night. Net result - still four games out of first.

In other news, Ian Kinsler, seen here on card number 18 of the 2007 Bowman set, and Jason Grilli were placed on the 15-day disabled list. Grilli has inflammation in his right elbow and Ian's hamstring just hasn't been getting any better.

To replace them on the roster the Rangers called up pitchers Neftali Feliz and Doug Mathis. Mathis has been up earlier this season with the team but this is Feliz's big call. Neftali is supposed to be a super-prospect and was slated to show up next year. Hopefully this early call-up isn't a mistake.

In addition to the pitching call-ups the club also activated Frank Francisco off the DL. Frank seems to be over his pneumonia and ready to hit the hill. Good news.

The team can use the pitching help, that's for sure. Tonight they start a ten game road trip. The first series is against Oakland and then they go to Anaheim before finishing in Cleveland. The team has done well in their past several road trips and needs to keep the roll going to close the gap with Anaheim.
Posted by Spiff at 11:15 AM