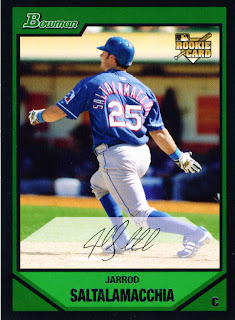 September call-ups are just around the corner and word is that the Rangers will try to bolster their pitching and catching staffs. There is also the possibility of a little speed for pinch running situations.

Jarrod Saltalamacchia, seen here on card number BDP26 of the 2007 Bowman set, is unlikely to return to the team tomorrow when the roster expands. He had been set to come off the DL then but the team has shut down his minor league rehab stint. Apparently he left the game yesterday after seven innings when his arm started to go numb. That probably indicates the need for season-ending surgery to address his Thoracic Outlet Syndrome.

At least the team has Pudge to keep things together for the rest of the season. So far Ivan's ability to handle pitchers seems to be better than Salty's. That could be key as the team gets to the do-or-die point in the season.
Posted by Spiff at 7:15 PM

I wasn't very happy when I heard about this. Come back soon Salty!