Texas tees off on Twins. 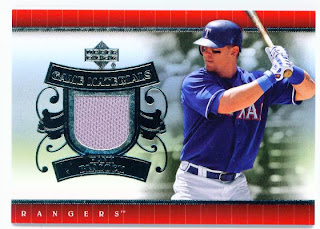 Hank Blalock, shown here on card number UD-HB of the 2007 Upper Deck Game Materials set, was one of three Rangers to go 3-for-5 on the night. The other two were Julio Borbon and Michael Young.

Marlon Byrd was perhaps better as he went 2-for-3 with a walk and an awesome diving catch on defense. Josh Hamilton chimed in and went 2-for-5. The rest of the lineup all got one hit each.

Everyone in the lineup hitting and the pitching running smooth. Gotta like that. Hopefully they can take it on the road since they have more road than home games from here on out.
Posted by Spiff at 7:50 PM