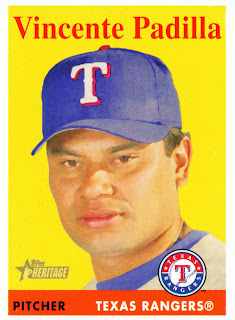 The guys backed Tommy Hunter with six runs to top the A's 6-4 last night in the last game of the series in Oakland. Anaheim won though so Texas is still 4.5 games out. Tonight starts a three game series in Anaheim. Very good time for the team to get hot and make up some ground.

Vicente Padilla, seen here on card 290 of the 2007 Topps Heritage set, last pitched on Wednesday. He went 5.2 innings and allowed six runs. Several of those runs came on the three home runs he allowed. He also hit Kurt Suzuki (A's catcher) without provocation. What a dolt. Padilla has a reputation for starting throwing wars. Sure enough, the A's retaliated and hit Michael Young. Fair enough. You gotta protect your players.

Apparently Padilla's beanball antics didn't sit well with the Rangers' front office. Neither did his sitting on the bench laughing as Michael Young got thrown at. That probably contributed to his being designated for assignment today. That puts Vicente on trade waivers immediately. If he clears waivers the Rangers might try and trade him. That appears unlikely, they will probably end up releasing him.

About time. Somebody with a 4.92 ERA has no business trying to cultivate a bad guy image by throwing at opposing players.
Posted by Spiff at 7:32 PM

Good riddance! I don't wish him upon any team in either league.

Yeah, very unusual to be in the position of rooting for a team that is still in contention in August. I am enjoying the ride.

I liked Marlon Byrd's reaction to the situation. When told that Padilla had been released Byrd responded - "about time"