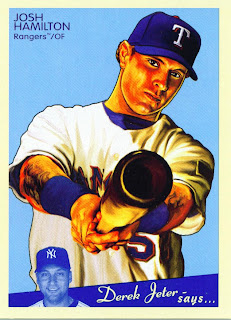 Unfortunately I can't find a card of Tommy Hunter. Give me a break though, Tommy has only appeared in twelve games over the last two seasons with Texas. Tonight he was the man however as he tossed 7.2 innings of shutout ball. After C.J. Wilson wrapped things up, the final was 5-0 Texas on top of the Indians. Tommy struck out five and walked none as he picked up his fifth win of the season. Nice.

Another nice thing is the apparent return if Josh Hamilton's bat, seen here on card number 186 of the 2008 Upper Deck Goudey set. After stumbling a bit coming out of the All-Star break Josh seems to finally be heating up offensively. He went 3-for-4 tonight with no strikeouts. One of Josh's hits was a two run double to give the Rangers their initial lead. That performance gets Josh today's card in the absence of Tommy Hunter.
Posted by Spiff at 9:11 PM

It's nice to see Hunter have another good outing. It's very, very nice to Josh swinging the bat well again. I hope he keeps it up going forward.

Hopefully he has worked out of his funk for good. 4/4 today, so that is always good!