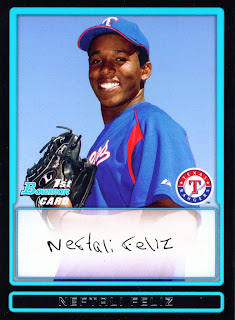 The Rangers' win at Cleveland yesterday was brought to you by the letters F and H. As in Feldman, Feliz, Francisco, and Hamilton. The win gave the series to Texas and left them with a .500 road trip as they head home to face the Red Sox tonight.

Scott Feldman was his by now effective self as he went six innings while only giving up on run. That was good for his 12th win of the season. He struck out six while walking two and hitting a batter. Some control issues there but not enough to hurt him.

In the third inning with Texas down one run Josh Hamilton came to bat with two on. A double later the Rangers were leading 2-1. All told Josh went 4-for-4 with his double, two RBI, and a run scored. Great night for Hamilton.

Neftali Feliz, seen here on card number BP1 of some 2009 Bowman set, came on in relief in the seventh. He went two perfect innings striking out five. Continuing from his last appearance that gave him seven strikeouts in a row. With the exception of Nolan Ryan in 1991, that is the only time any Rangers pitcher has gotten that many K's in a row. Nice. Hopefully he can keep this up.

Frank Francisco closed things out with a scoreless ninth inning. That gave him his 16th save of the season and pulled the Rangers to within a half a game of the Red Sox in the Wild Card race. They are also 4.5 games out from the Angels in the A.L. West.
Posted by Spiff at 11:04 AM