Feldman to the rescue. 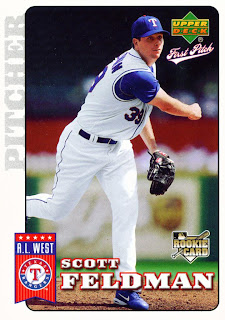 Once again this year, Scott Feldman strode to the mound to deliver the Rangers from a tight situation on the road. Once again he delivered. Scott's win last night kept the Rangers from getting swept by the Devil Rays and also kept them up in the the post-season hunt.

Feldman, seen here on card number 196 of the 2006 Upper Deck First pitch set, was superb yesterday. He lasted seven innings, allowed no runs, and struck out 11. That performance brings him to 9-1 on the road for the season and 13-4 overall. I think there are a lot of folks out there wondering where Scooter came from. He was never a highly touted prospect but things seem to be coming together for him this year. One downside to Scott's surprising year is that I may soon run out of cards of his to post.

Michael Young and Ivan Rodriguez did the heavy lifting to back Feldman on offense. Both had two RBI and neither struck out. Michael went 1-for-4 while Pudge tallied 1-for-2 with a walk.

Today Michael Young was named the AL player of the week. His .500 week at the plate is the most likely reason for the honor. Nice to see Mike getting some kudos.

According to T.R. Sullivan, Jarrod Saltalamacchia has Thoracic Outlet Syndrome. The Rangers are hoping it is a mild case and that he will be back by September 1st. No guarantees though.

Chris Davis is headed back to the majors. He will be activated tomorrow and will take over at first going into New York. Crush has been hitting .327 in Triple A and continuing his Gold Glove calibre defense. It would be nice if he can continue the offense against the Evil Empire.
Posted by Spiff at 6:12 PM