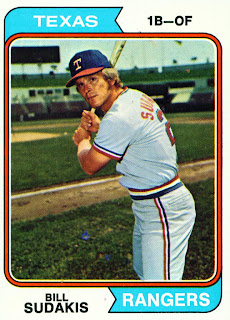 Very little to write about from last night or tonight's game. Hard to find the bright gems in blowout games. Can't figure out how the team wins like they did on the road and then implodes at home. Anyway, on to today's post.

Today we get a look at pro bowler Bill Sudakis. At least that's what it says about Bill on the back of card number 63 in the 1974 Topps set. Apparently that's what Bill did during the off-season. Better than crochet I suppose.

In 1974 Bill Sudakis was not with the Rangers. After trading with the Mets to get him prior to the 1973 season the club kept him just one year. On December 7, 1973 Texas sold Sudakis' contract. Ironically it was to the New York Yankees. After just one year out of The Big Apple he was on his way back there again. Bill would spend 1974 in pinstripes.
Posted by Spiff at 9:24 PM