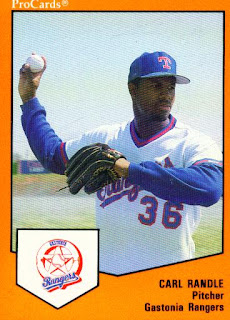 So the Rangers won last night on a shutout by C.J. Wilson. That win gave them five in a row and a four game sweep of the Indians in Cleveland. Also gave them a 2.5 game lead over the Mariners in the American League West.

However, this evening I watched a team of six and seven year-olds play their second official game in the local coach-pitch league. That coupled with the draft kicking off today made me decide to hit the minors on this Monday.

Carl Randle, seen here on card number 1005 of the 1989 ProCards set, was the 17th selection in the 1988 draft. That year he pitched for Butte in the rookie league.

Carl started the 1989 season with the Gulf Coast Rangers in Rookie ball. After 13 appearances and 68 innings there he had a sparkling 1.72 ERA and a 1.132 WHIP. That got him promoted to Single-A ball.

With the Gastonia Rangers Randle would find the competition a bit harder than he did in Rookie ball. Randle would appear in 17 games for Gastonia, all in relief. In 33 innings he would post a higher but still acceptable 3.55 ERA. His WHIP climbed to 1.667. He would strike out 32 batters while walking 31. That ratio and the creeping WHIP did not bode well.

All told Carl would pitch in the Rangers system through the end of the 1991 season without ever getting above Single-A. Not sure what happened but in 1994 he would try a comeback with an independent league. That wouldn't stick though.
Posted by Spiff at 9:22 PM