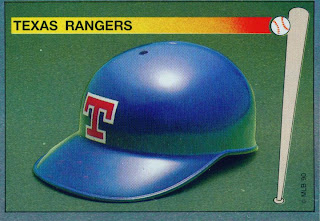 Ok, the next three decisions in T.R. Sullivan's list deal with the ownership side of things. Between being a little behind on this aspect and not having many cards featuring owners I have decided to lump them all into one post. For the post I am showing sticker number 166 in the 1990 Panini set.

Number six is the decision to award a new franchise to Washington in 1961. Of course this impacted the Rangers because the new Senators would later move to Texas to become the Rangers.

In a way the awarding of the franchise was pretty amazing. There were plenty of other cities that would have taken a team and Washington had just lost their franchise to Minnesota. It seems a bit odd to think it would be able to support a new one. Perhaps the powers that be thought the city had learned its lesson and would come out and support the team.

Just as big as the awarding the franchise was the poor management put into place. General Elwood Quesada was the team's first owner. He made several bad decisions - including a ten year stadium lease, that haunted the team. Perhaps his style might be summed up in the rumor about him asking why he even needed to pay players who didn't belong in the Majors. Needless to say, by the time Quesada sold out in 1963 he had laid the foundation for a decade of futility.

Number seven on T.R.'s list is the sale of the team by Eddie Chiles in 1989. The new owners, headed by George W. Bush and Rusty Rose brought in financial and operational stability. For the first time the franchise could operate on more than a year-to-year basis. Early signings of key free agents would help build up to the first two playoff appearances in club history.

Number eight appropriately follows the Bush/Rose ownership. In 1994 George Bush left the ownership group after being elected to the governorship of Texas. With Bush gone the clock started ticking. In 1998 what remained of the group sold the franchise to Tom Hicks. One more playoff appearance remained before Hicks drove the team into the ground and led it into a decade of futility.
Posted by Spiff at 3:49 PM