Shooting down the Astros. 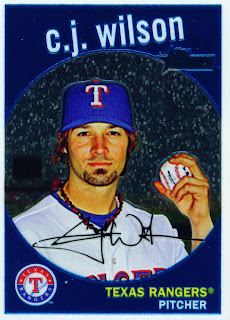 Well, the Rangers road woes took a hiatus last night with a 7-3 win in Houston. Nice to see the offense come alive again. Part of that offense was pitcher C.J. Wilson, seen here on card number C299 of the 2008 Topps Heritage Chrome set. C.J. went 1-for-3 at the plate. His hit was a triple and he ended up scoring a run. Not too shabby for an American League pitcher. Ian Kinsler, Josh Hamilton, and Mitch Moreland also had good nights at the plate.

Along with the offense Wilson was back in form as the staff ace. He went seven innings while allowing just two runs. That in spite of taking a batted ball off his leg and his throwing hand. Hung in there though and got the well-deserved win.

Glad to see the win. I know Houston has been struggling but the Rangers have had a rough time on the road recently. Ian Kinsler in particular is night and day at the plate on the road and at home. Good to see him put together a good game away from Arlington. Maybe that will help him relax and get the train back on track.
Posted by Spiff at 8:27 PM