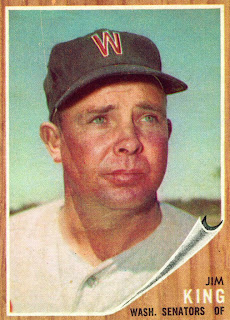 Today's shelling by the Mets was ugly. Very ugly. Not something I really want to talk about. Time for another Senators Saturday.

Jim would appear primarily in right field but would put in some time in left as well. The 605 innings in right was enough for him to be considered the starting right fielder though. All told Jim would play 778 innings in 101 games in the outfield in 1962. He would see 191 chances and would handle all but four of them without an error. Interestingly he was also involved in four double plays as well. His .979 fielding percentage was just one point below the league average.

Jim would slip a bit on offense from the previous season. He would have 90 more plate appearances than in '61 for a total of 396. That would net him ten more hits (81) and three more doubles (15). His home run output would remain the same at 11. King would see his batting average drop 27 points to .243 and his on-base percentage slump ten points to .353. In spite of the drop the on-base percentage was the best in the starting nine.

Jim's main problem following the 1962 season would be making himself stand out. The Senators outfield could be a crowded place for a decent defensive player with middling offensive skills. Jim would need to work on one or the other in order to carve out a permanent spot for himself.