Scott Coolbaugh makes it to The Bigs again. 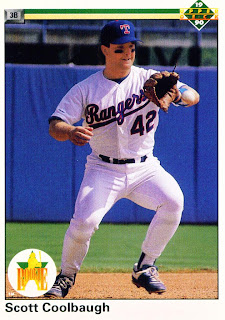 So call me out of touch but I didn't realize until today that Thad Bosley got fired a couple of days ago. I even listened to most of last night's game and never heard it mentioned.

Apparently the issue was not the Rangers offensive production
or Bosley's knowledge. Thad just never hit it off with the players and never got to know any of them. The result was a lack of communication that proved fatal to his stint as the team's hitting coach.

To replace Bosley the club named former Ranger Scott Coolbaugh as the new hitting coach. Scott was with the Rangers in 1989 and 1990 and has been a coach in the minors for them for several years. He was also on the short list the last couple of times the team was looking for a hitting coach at the Major League level.

In a way this is a feel good story as well. Scott and his brother Mike were both minor league coaches in 2007. Both were former Major League players and were hoping to return to The Bigs as coaches. Unfortunately Mike was killed by a line drive while coaching first base in a double-A game. The result was the helmets that first and third base coaches now wear at all levels of pro ball. Scott said that the shared dream with Mike and his tragic passing make this recent promotion mean all the more.

As a final note, Scott appears today on card number 42 of the 1990 Upper Deck set. Interesting since he is wearing the number 42 on the front of the card. More so since Major League Baseball has since retired the number 42 in honor of Jackie Robinson.
Posted by Spiff at 8:16 PM