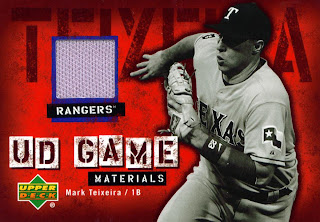 Well, the All-Star voting is underway and the leading candidates were just released. Had some Ranger related musings on how things are shaping up.

At first base it is amazing how many of the leaders have Texas ties. Money Man Teixeira, shown here on his 2006 Upper Deck Game Materials card, is the leader. Adrian Gonzalez is next. Both are former Rangers. Mitch Moreland is running fourth.

Robinson Cano is looking to start at second base. Texas could have taken him over Joaquin Arias in the Alex Rodriguez deal. Of course that might have squeezed Ian Kinsler who is currently third in the race.

Elvis Andrus is third as well. Some old guy who plays for the Evil Empire is first. Really.

Speaking of the Alex Rodriguez trade, he's in first at third. Adrian Beltre is running third.

A bit thin at catcher in the American League apparently. Russell Martin is in first and Yorvit Torrealba even shows up in the top five.

At DH Michael Young is looking to lock up yet another trip to the midsummer classic. Mike has done a good job to this point of getting past his late off-season hissy fit. Hope he can keep it up and gets to the game. Young deserves a little recognition after he and Beltre carried the team in Hamilton and Cruz's absence.

In the outfield Josh Hamilton is third. All around vote leaderJose Bautista has a spot locked so third is really second. Nelson Cruz is still in the hunt as well.

Good to see so many Rangers in contention for spots. As usual though, I find the voting to be frustrating. Obviously the usual New York ballot stuffing is going on. Derek Jeter is first in votes at short? Jorge Posada is third at DH? Martin Russell is really the best backstop in the American League? Come on. This is why the game loses a little more importance to me each year.
Posted by Spiff at 6:26 PM

With the demise of Joe Mauer, I can't name another catcher besides Martin who is doing relatively well.

Other than J.P. Arencibia, Matt Wieters, Carlos Santana, and Alex Avila you are probably right. At least these four guys are at minimum Martin's equal. Convincing arguments could be made that at least Wieters and Avila are better.