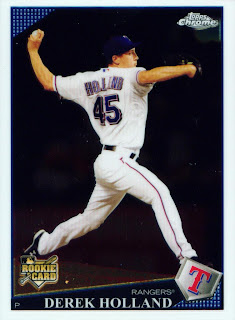 The main story last night was the Rangers offense. After struggling recently the bats came alive. Adrian Beltre and Craig Gentry led the charge. Gentry was especially impressive with three hits and three stolen bases. Unfortunately I don't have any Rangers cards of either of those guys yet. Looking to get that remedied soon.

Derek Holland, shown here on card number 218 of the 2009 Topps Chrome set, started the game and got the win. Derek went 7.1 innings and allowed three runs. That was good enough to get him the win as Texas downed Houston 8-3. After the game Derek was asked why he thought he has gotten such good run support this year. He attributed it to his pregame Arnold Schwarzenegger impressions. Whatever it takes man. Maybe the rest of the rotation should learn how to mimic famous people.
Posted by Spiff at 9:15 PM

It's always nice to start off the home-stand with a win and it doesn't hurt to have the walk-off homer from Moreland in game 2!