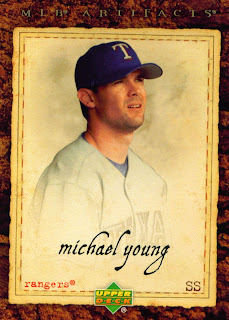 Well, the Rangers finally got their first win at Target Field in Minnesota last night as they beat the Twins 9-3. Not the first this year, the first since the stadium was built. There were also a couple of individual player notes as well.

Micahel Young, shown here on card number 30 of the 2007 Upper Deck MLB Artifacts set, managed to break out of a slump. Mike went 3-for-5 at the plate with three RBI and a runs scored himself. Good to see after his recent struggles. Part of the problem may be that he is getting tired after only missing one game to this point in the season. Ron Washington says that Young will sit in one of the next two games.

C.J. Wilson also broke out of a slump of sorts. After losing both starts in Minnesota last year he put together a win. Considering the rainy conditions Wilson's seven inning outing with three earned runs wasn't too bad. Nice to have a pitcher like C.J. who can put a stop to losing streaks before they get out of hand.

All in all a good evening up north. With the aid of hot bats, a solid start by Wilson, and lots of drying agent on the field, the guys were able to notch a win. It would be nice if this is the start of another winning streak.
Posted by Spiff at 11:07 AM