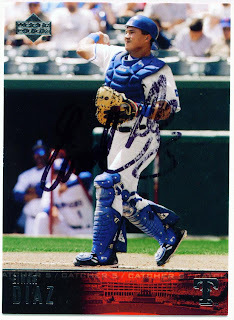 Due to the Internet going down just as I finished this post last night I was unable to get it up until now.

Had Spiff Jr. ballgames last night and tonight. He did well with his catching but his team didn't do too much better than the Rangers the past three nights against the Yankees in New York.

Since I have no other ideas for tonight. I decided to post a random through the mail auto success. Since Spiff Jr. is still wanting to catch I decided to go with a card featuring the catcher's gear in action.

I sent this 2004 Upper Deck card to Einar Diaz on February 5, 2009. He graciously signed and returned it. I got it back on February 20, 2009. From what I could tell, the damage to the signature is from the card rubbing on the inside of the return envelope. Even with that I am still glad to have the card in my collection and grateful that Mr. Diaz was willing to sign and return it.
Posted by Spiff at 2:23 PM