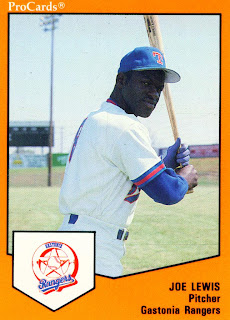 Joe Lewis is listed as a pitcher on card number 1007 of the 1989 ProCards set. Not only is he listed as a pitcher on the front of the card but the position is repeated on the back. When I first looked at the card I thought this was an interesting pose for a minor league pitcher in an American League team system. When I flipped the card over I saw the batting average along with the rest of Joe's offensive stats. Looking at baseball-reference.com I can see that Joe never pitched.

The Rangers signed Lewis as a free agent in 1988. He played at Butte in Rookie ball the same season as an outfielder, shortstop, and catcher. He would start the 1989 season at Butte before being promoted to Single-A Gastonia. No shortstop in 1989, just outfield and catching.

In 1989 Lewis blew the cover off the ball in Rookie League with a blistering .385 batting average and a .429 on-base percentage. He couldn't translate that success to Gastonia though. His batting average dropped to .233 and his on-base percentage to .333. No too surprising but he also struck out three times more than he walked. Not good news at such a low level in the farm system.

The Rangers would leave Lewis at Single-A for the 1990 season as well. In 1990 he spent most of his time hitting but also spent some time behind the plate, no outfield. The team probably wanted to see if he could catch up to the pitching and bring his offense up. He couldn't. At season's end his batting average sat at .235 and his on-base percentage at .287 - even lower than the year before. With young phenom Ivan Rodriguez looking to set up shop behind the plate in Arlington things weren't looking good for a minor league catcher struggling at Single-A. That probably contributed to 1990 being Joe's last season as a professional ball player.
Posted by Spiff at 8:01 PM