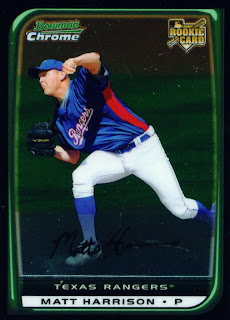 The Rangers have been profiled by Sports Illustrated as being on the edge of pitcher use and training. Sully over at Sully Baseball mentioned Nolan Ryan's views of handling pitchers in one of his videos. Texas doesn't usually coddle their pitchers. Still, I never thought I'd see what happened on Saturday night in Atlanta.

Matt Harrison, shown here on card number BDP20 of the 2008 Bowman Chrome set, is having a pretty good year. So far he's got a 3.16 ERA and a 1.27 WHIP. Not bad for a guy who wasn't a lock to make the starting rotation in Spring Training. Starting the season Matt was considered the number three pitcher in the rotation.

On Saturday Harrison started the game against his former franchise as the Rangers visited the Braves in Atlanta. After 4.2 innings he was pitching with a 4-2 lead and looking good. Then the rain came. I was hoping for a just a short delay so Matt could get back out and be the pitcher of record. After all, he has already lost a start this season to rain - that one when he was ahead 7-0.

An hour into the delay I was feeling bad for Matt. After all, there was no way he was coming back out. Two hours in I was wondering if the game might be called. After a delay of two hours and sixteen minutes the game resumed. To my surprise Matt Harrision strolled back out to the mound to finish the fifth. First time I can ever recall a pitcher coming back into a game after a lengthy delay. I understood though. Ron Washington wanted Matt to get the official game after losing one earlier in the season. Surely after getting that long-delayed out Matt would leave the game. Wrong.

All told Matt went 6.1 innings and allowed just one earned run. Amazing if you ask me. Matt's got guts to come back after the delay and then sit twice more before leaving the game. So does Ron Washington to let him try it. No babying that pitcher going on there. More of an iron man race.
Posted by Spiff at 9:05 PM