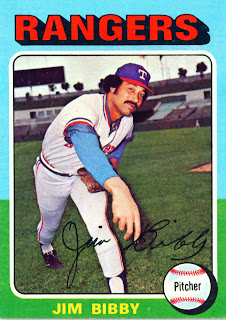 Jim Bibby leads off the 1975 Topps team set on card number 155. Jim's got the blue-green combination going here. As a blatant promotion of another blog, I would encourage anyone interested in the 1975 Topps set to check out Night Owl's 1975 Topps blog. It's a good read.

Jim had suffered through a pretty lackluster year in 1974. If he was looking to rebound in 1975 he was going to be disappointed.

In 12 starts with Texas Bibby would toss 68.1 innings and end up with a 2-6 record. That wasn't better than the year before, in fact it was worse. Jim's ERA would also get worse as it surged up 1.12 points to an even 5.00. His WHIP climbed almost ten points to 1.478. In addition Jim had walked 28 batters while striking out just 31. Not a good ratio.

Clearly Jim was struggling. With the numbers he was putting up something had to give. On June 13, 1975 something did give as the Rangers traded Jim to the Indians. Along with Bibby the Indians got Jackie Brown, Rick Waits, and $100,000. In return the Indians sent Gaylord Perry to Texas.
Posted by Spiff at 8:06 PM