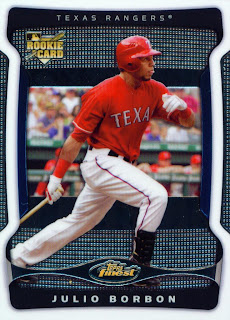 On May 14th Julio Borbon, seen here on card number 4 of the 2009 Finest set, left a game after a play in centerfield. The Rangers later put him on the Disabled List with a strained left hamstring. At the time Julio was hitting .270 with a .305 on-base percentage.

To replace Borbon Texas called up Endy Chavez. Using Chavez and Craig Gentry in platoon the team has done ok. Julio went though rehab without a problem and swung the bat well.

Before yesterday's game Texas activated Julio off the DL and optioned him to Triple-A Round Rock. Apparently Chavez's .415 average and .455 on-base percentage were too much to let go. The Rangers decided that Borbon would be better off getting regular playing time in Round Rock rather than sitting on the bench waiting for Chavez to stumble.

Chavez may stumble and Gentry may not continue his improvements. Both appear determined to avoid that scenario but it is comforting to know that Texas has a pretty decent center fielder who is probably wanting his spot back waiting in Round Rock.
Posted by Spiff at 7:16 PM

Labels: Card of the Day, Finest

Sadly Julio didn't look great in Round Rock today but I have a feeling he'll get his spot back before too long.