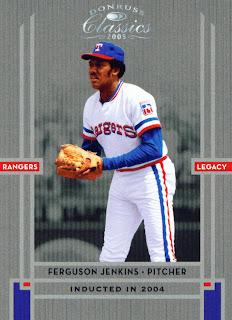 A while back I started a series of posts on the top 50 decisions in the first 50 seasons of Rangers' history that have shaped the club. I am basing that series of posts on a list compiled by MLB.com writer T.R. Sullivan. Since I started that series T.R. has released two more lists to mark fifty years of Rangers baseball. The second list was the top 50 strange occurrences in franchise history. The third was the 50 best seasons turned in by individual players. I am intending to do a series of posts on both of these lists while continuing with my original series.

To kick off the Best Seasons series we find Ferguson Jenkins at number one with his 1974 season. I've talked about this season in a previous post but it could bear a second look.

Over the years Texas has been known as an offense heavy club. Jenkins' 1974 season is the opposite and is by far and away the best by any Rangers pitcher ever. A recap of the season really isn't necessary but a look at the numbers is in order.

In his first year with Texas, Fergie would start 41 games. He won 25 of those starts while losing 12. Amazingly he completed 29 games, 6 of those were shutouts. All that pitching totaled to 328.1 innings for Jenkins on the season. He struck out 225 batters while walking just 48 - three of those walks were intentional. His ERA for the season was 2.82 and his WHIP totaled to 1.008.

Those numbers are incredible. I just can't see the innings total, wins, and complete games ever being matched by another Texas pitcher. In putting them together Jenkins put the Rangers into contention as they finished second in the American League West.
Posted by Spiff at 7:44 PM