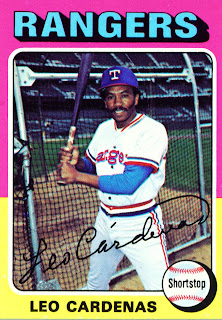 No game for Texas last night. One final day off before the final nine games of the season. Thought this would be a good time to take another look back at 1975.

Leo Cardenas appears today on card number 518 of the 1975 Topps set. Looks like Leo is taking a break from batting practice in this photo.

1975 was Cardenas' second season with the Rangers. Even though Topps lists Leo as a shortstop he spent the season as a utility back-up infielder. In 55 games he appeared at third base, shortstop, and second base. In spite of all that moving around Mr. Automatic made just five errors to keep in step with his reputation as a high quality defender.

Cardenas got 119 trips to the plate in 1975. In those plate appearances he struggled, posting a batting average of just .235. His 14 walks helped raise his on-base percentage to .328. Leo hit just two doubles and one home run all year.

Clearly at age 36 Leo Cardenas' was starting to slip. His numbers at the plate had never been intimidating but they had dropped in the past few years. His glove work continued to be good and his enthusiasm played a large part in motivating the team. The problem was that Texas had several options in the infield. To keep even his utility role in 1976 Cardenas would need to improve bit on his offense. Apparently the Topps photographer caught him just where he needed to be - at the batting cage.
Posted by Spiff at 11:10 AM