Murph is the man! 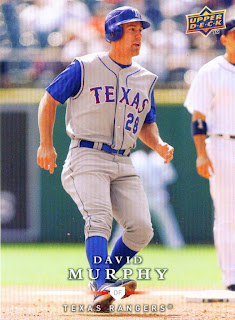 So Matt Harrison got his 12th win last night. Since Matt struggled a bit he was probably glad that the offense showed up in the 10-4 win over Cleveland.

The offensive onslaught was led in part by David Murphy. Murph, shown here on card number 486 of the 2008 Upper Deck First Edition set, went a perfect 4-for-4 at the plate. Two of his hit were long balls and a third was a double. David was rocking the house as he also scored four times and picked up a couple of RBI. Great to have a "reserve" outfielder who is capable of such a performance and who appreciates his role on the team. The Rangers are undoubtedly better with David Murphy on the team.

While nobody else had as big a night as Murph there were a few other offensive blows. Elvis Andrus knocked a double while Josh Hamilton and Adrian Beltre also homered.

All in all a great night for the Texas offense. They maintained their three game lead and picked up another win.
Posted by Spiff at 6:05 PM