Brilliant and not quite enough. 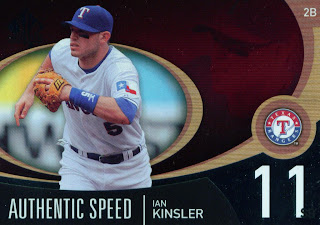 So C.J. Wilson started last night against the Devil Rays in Tampa Bay. Typical of C.J. as of late, he was good. Real good. In fact, this may have been one of the better games of his career. For the first time in his pro career he tossed a complete game shutout. I was a little surprised to hear that. Apparently he had never even thrown one in the minors. Ian Kinsler and David Murphy backed him up with home runs while the rest of the Ranger bats looked good. Final: Rangers 8, Devil Rays 0.

I seem to be running low on C.J. Wilson cards. Guess that's what happens when the guy throws a gem every time he pitches. In light of that I will give today's card to Ian Kinsler. Ian appears on card number AS-25 of the 2007 SP Authentic Speed set. Got to give Kinsler the nod due to his offensive performances in the past two games. In addition to his home run last night he also homered twice this afternoon. That was enough to get the Rangers back into the game in spite of Derek Holland's struggles. Not enough to win it though as Mark Lowe surrendered a walk-off home run in the tenth inning. Final: Devil Rays 5, Rangers 4.

Once again Texas has been up and down over the past couple of days. Starting to feel like a yo-yo here.
Posted by Spiff at 9:05 PM