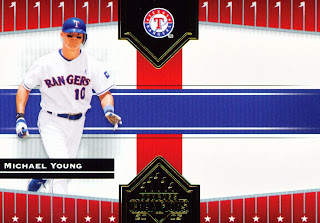 The Rangers saw several important numbers come up in their 7-2 win over the Oakland A's last night. Michael Young, shown here on card number 308 of the 2005 Donruss Champions set, said that the most important number was 4. That's the magic number after the win. With a five game lead and eight left to play, things are looking good. Not that the Angels couldn't still rain on the parade but it's looking good so far.

In addition to the magic number getting down to four, starting pitcher Derek Holland saw his season win total rise to 15 as he threw seven innings of two-hit ball. One hit was a solo home run. A second solo shot off the bullpen gave the A's their total runs for the night.

The other important numbers on the night belonged to Michael Young. He went 3-for-5 at the plate to raise his season hit total to 201. That's his sixth 200 hit season and the first since 2007. He also managed to raise his season batting average to .333. Additionally Michael bumped in two RBI to push his season total to 104. That beats his previous career high of 103 in 2006.

Good to see the winning continuing and Young clicking on all gears. I gave him some grief at the start of the season over his behaviour but he seems to have put that behind him. Nice to see.
Posted by Spiff at 4:41 PM